The Genesis Vera measures residual seal forces on parenteral vials sealed with stoppers, lined seals and aluminum caps. The aluminum caps can be plain aluminum, or aluminum with plastic buttons, though it is highly recommended that the plastic buttons be removed prior to testing. Other cap materials and styles may be accommodated as specialty applications. Specialty applications should be submitted to Genesis engineering for evaluation. Vials with diameters of 8mm to 88mm, and heights (including vial, stopper and cap) up to to 6.47 inches are accommodated. A wide variety of cap styles and sizes can be accommodated with specific cap anvils. Cap sizes including 7.5, 8, 10, 11, 13, 16.5, 17, 18, 20, 28, 30, 32, and 43 mm are supported. Residual seal forces in the range of 3 Lbf to 35 Lbf can be measured.

The FDA recognizes the use of RSF as a predictor of seal integrity.

The FDA in its Guidance for Industry Container and Closure System Integrity Testing in Lieu of Sterility Testing as a Component of the Stability Protocol for Sterile Products recognizes the usefulness of properly validated seal force testing. Most importantly, RSF is useful in the establishment, validation and control of capping machine settings.

The measured residual seal force is displayed on an operator interface on the front of the instrument and is automatically stored in a secure SQL database. The display includes a graph of captured data and analysis data points.

The residual seal force readings are completely objective (no operator subjectivity is involved in the measuring process) and consistent within +- 20%.

The instrument includes a safety enclosure to protect the operator in the unlikely event of glass breakage or slippage, and to keep fingers away from the actuator assembly during the process of collecting data.

All manuals and validation documents are provided digitally as PDF files as well as on board in a HTML 5 searchable format. 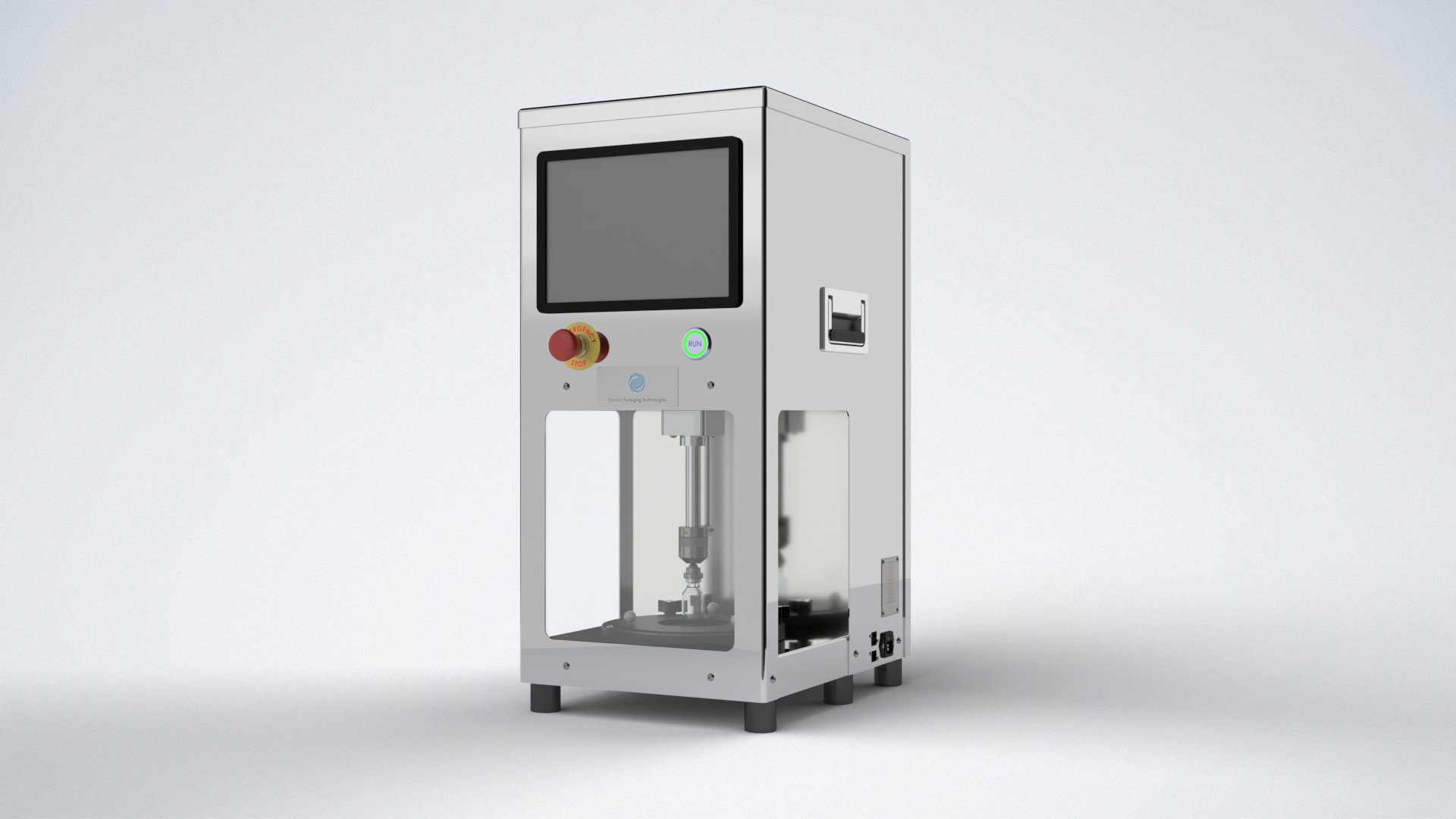 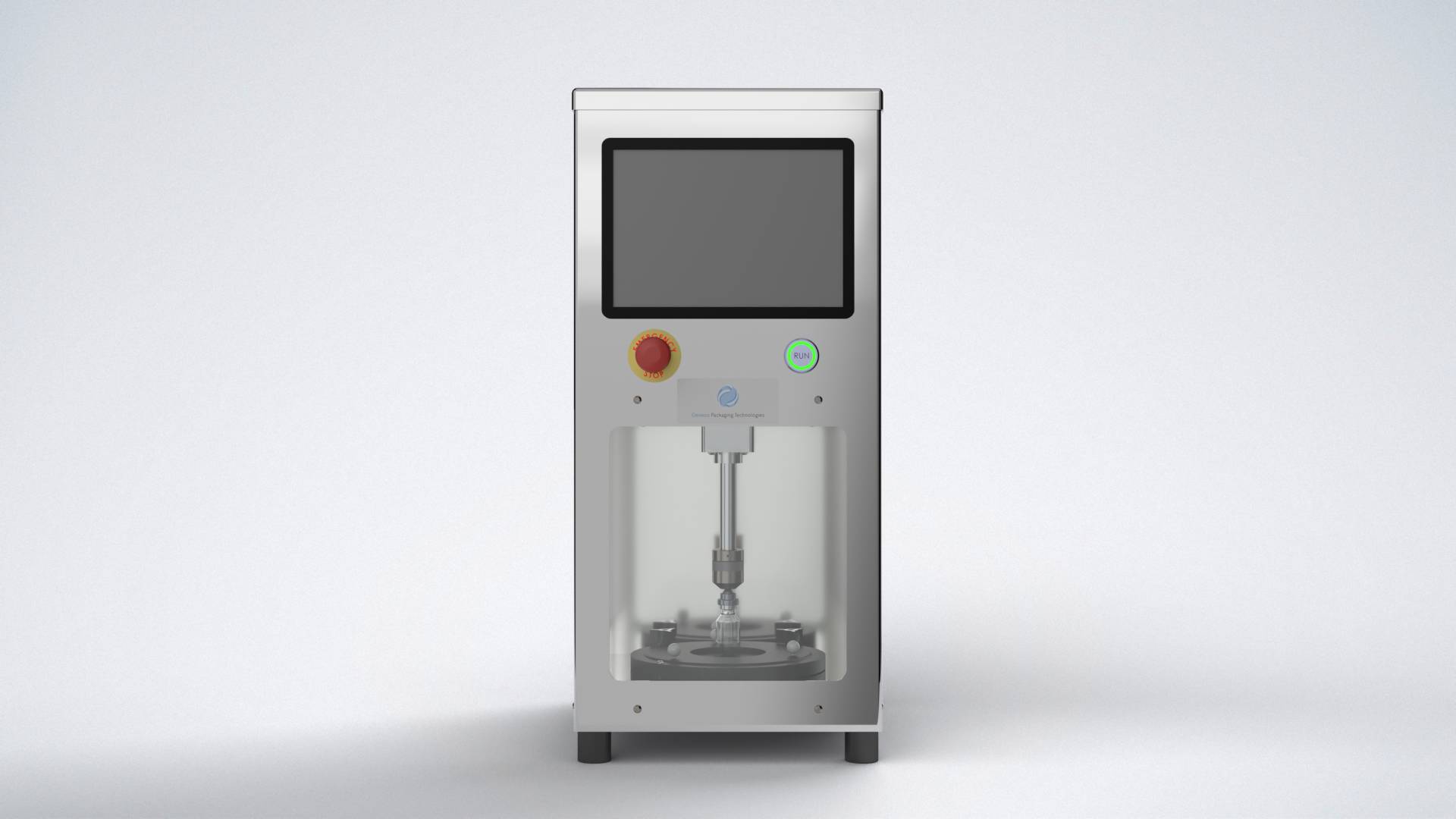 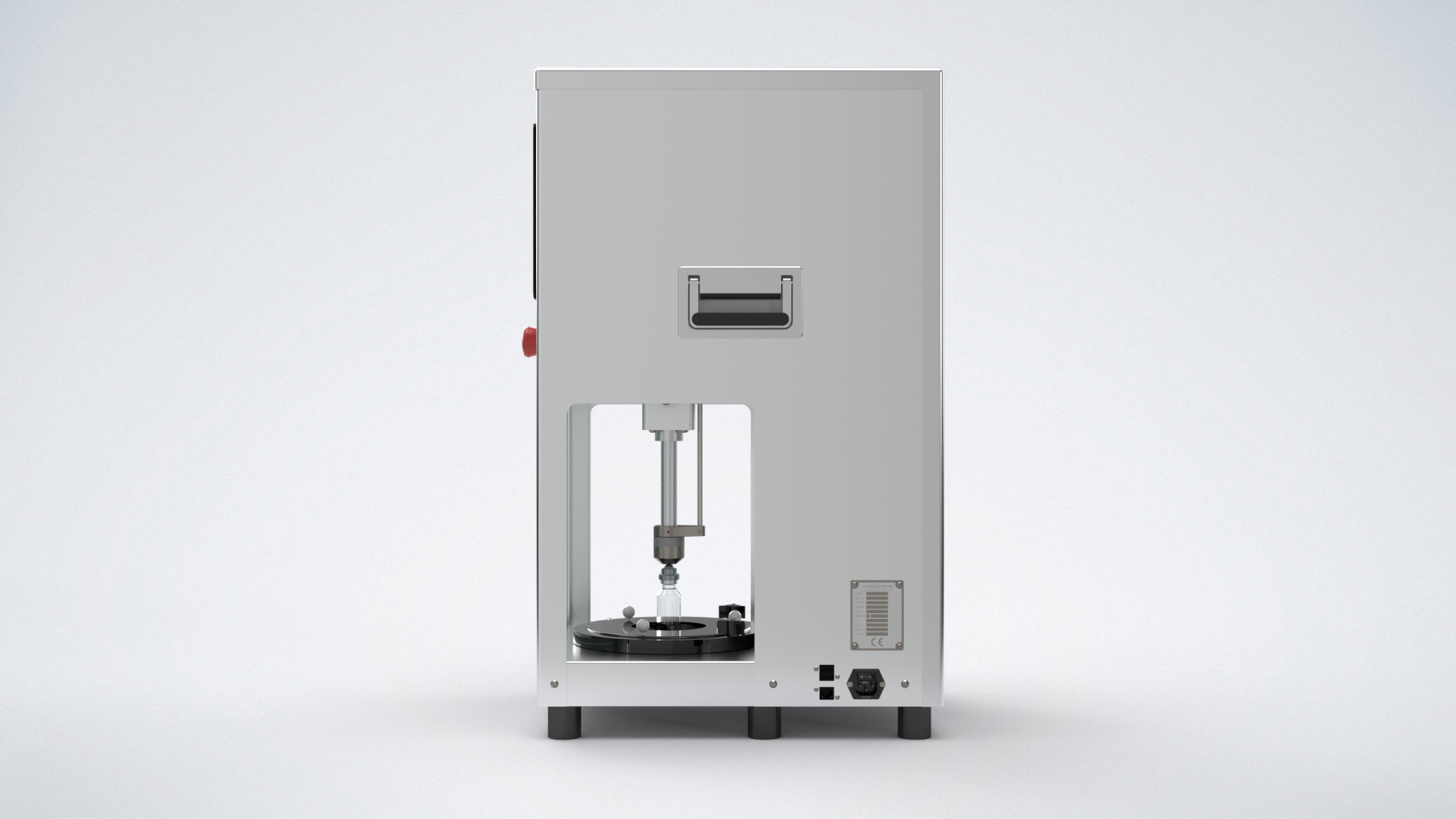 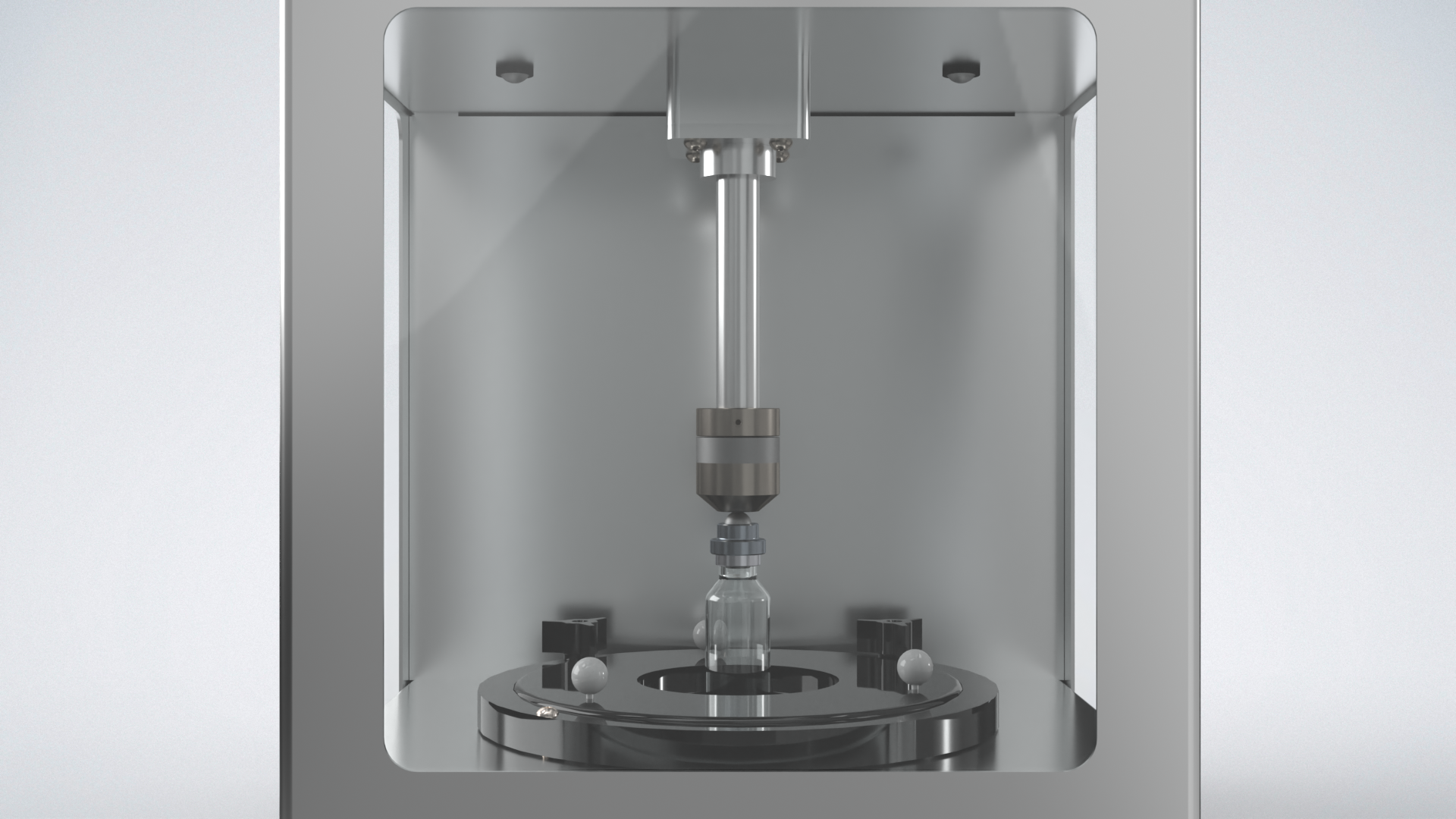 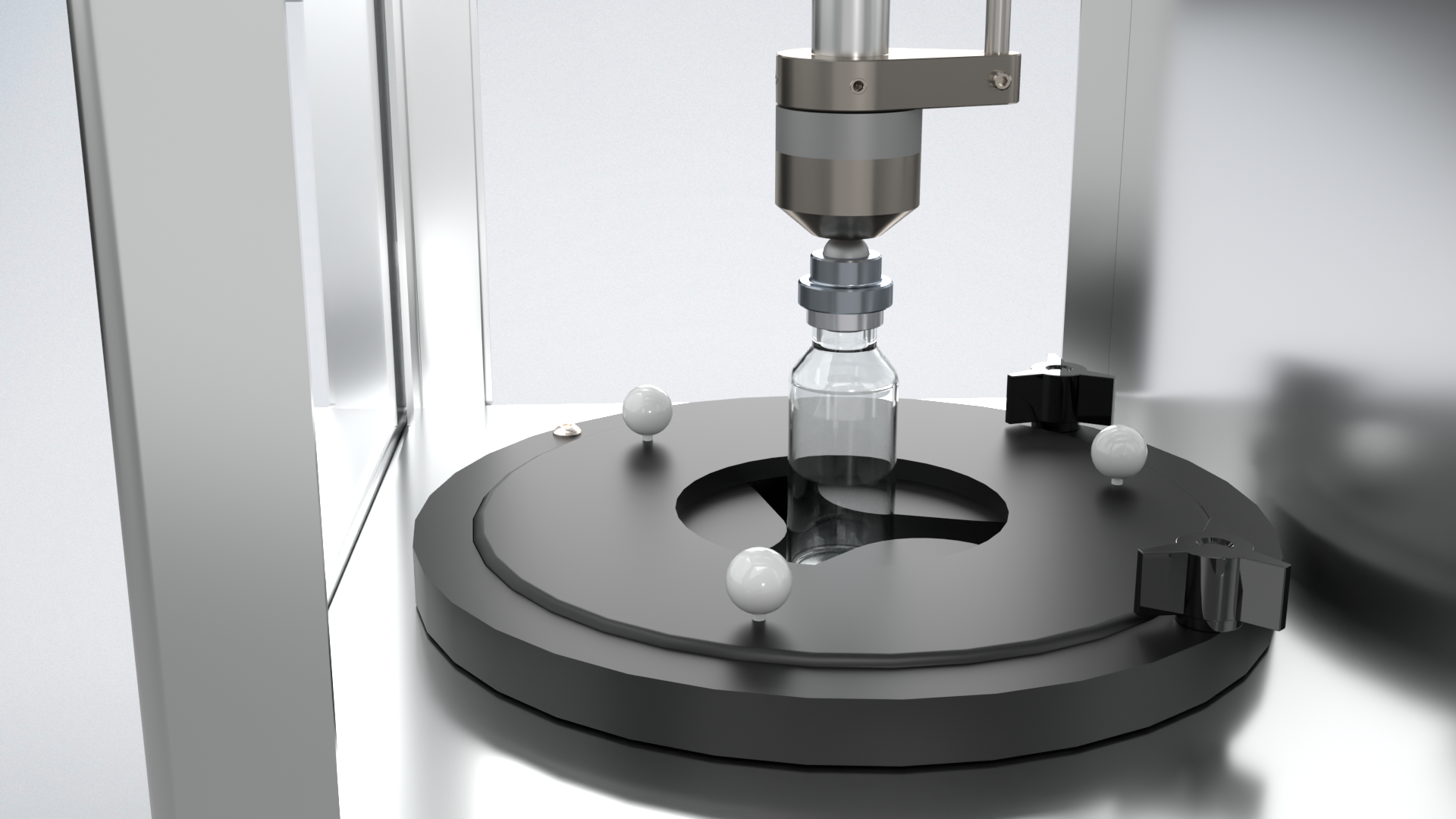 The control platform utilizes a reliable PLC and modern PC architecture for all data acquisition and resultant processing.

The vial rest is adjustable to fit any vial size from 8mm to 88mm without having to change parts.

Units for reporting can be switched between Imperial (Lbf Inches) and (Newtons mm). The selection becomes the default for future operation.

The improved 10.1 inch screen allows for rich graphical data and reports to be displayed right on the tester.

The ability to add custom labels to your samples allows for more robust sample tracking.

The force feedback entails a step by step process with a three point final verification and date/time stamp.

A distance calibration process has been added and includes a three point final verification with date/time stamp.

The ability to export reports and graphs to a Microsoft Excel spreadsheet or to Crystal Reports. A licensed copy of Excel is included with the unit.

Wireless mouse and keyboard support is built in to the embedded PC.

Manage all users with fine grain security controls to restrict access and control use cases. Options are available to automatically obtain user credentials from a customer's secure server.

The Residual Seal Force Tester is capable to be 21 CFR part 11 compliant.

The Residual Seal Force Tester has been certified for use with Vaporized Hydrogen Peroxide.

The Residual Seal Force Tester has been certified to be CE compliant.

A sample of the RSF Test Report that the tester exports to a Microsoft Excel file.

A sample of the RSF Analysis that the tester exports to a Microsoft Excel file.

A screen shot of the operator interface of the Vera.

The vial capping process is a critical unit operation during drug product manufacturing, as it could possibly generate cosmetic defects or even affect container closure integrity. Yet there is significant variability in capping equipment and processes, and their relation to potential defects or container closure integrity has not been thoroughly studied. In this study we applied several methods—residual seal force tester, a self-developed system of a piezo force sensor measurement, and computed tomography—to characterize different container closure system combinations that had been sealed using different capping process parameter settings.

...and why is it important?

A parenteral vial system consists of a vial, a stopper and an overseal. Container/closure integrity of this parenteral vial system is achieved primarily by the proper deformation of the rubber stopper. Deformation is achieved by compressing the stopper against the sealing surface of the vial finish. Once compressed, the stopper is held in place by crimping an aluminum ferrule or seal around the components. In deforming the rubber stopper, the viscous flow of the elastomer fills and seals the voids between the sealing surfaces of the vial finish and the stopper flange. The elastomeric property of the rubber, which is the tendency of the elastomer to revert to its original shape while being held it in the deformed state, creates a force (strain) that effectively maintains the created seal. Although the compression of the stopper plug created by the interference fit between the plug and the inside diameter of the neck of the vial may also create a seal, it is the vertical force from the compression of the stopper flange against the top of the vial finish that creates the primary and more reliable seal. By correlating RSF to stopper compression and CCI testing during packaging development RSF may be used as a predictor of container closure seal integrity (Orosz, Guazzo 2010)*. This work clearly shows that an appropriate amount of stopper compression creates effective container closure integrity where leak rates of less than 10-7 Pa m3/s can be achieved even on glass vials with “large” surface defects. Therefore, the primary function of a sealing operation is the deformation of the rubber stopper by compression; secondary is the crimping mechanism to hold that compressed stopper in place.

It is important to understand that Residual Seal Force is not a constant value. The change in RSF can be illustrated graphically utilizing the degenerative Maxwell Curve. Changes in RSF are the result of stress relaxation and the compression set of the elastomer. Over time, as indicated by the curve, the elastomeric stress continues to very slowly decline due to the rheological characteristics of the rubber until a relative plateau is reached. A specific RSF value is meaningless unless its location on the curve is known since the changes in stress are not linear. This degeneration and its effects on RSF need to be understood for each elastomeric formulation and stopper design. The physical and mechanical properties of the closure are determined by the rubber formulation and the stopper dimensions. These properties include durometer (relative hardness), compression set and modulus of elongation. Thus the stress relaxation curve and residual seal force may vary with each different rubber formulation. Processing and storage parameters, particularly temperature, may also influence this curve. By correlating RSF values with the compression of the rubber stopper and the corresponding leak rates, the measurement of RSF can be used to effectively evaluate proper and continued sealing of the vial system. FDA in its Guidance for Industry Container and Closure System Integrity Testing in Lieu of Sterility Testing as a Component of the Stability Protocol for Sterile Products recognizes the usefulness of properly validated seal force testing. Most importantly, RSF is useful in the establishment, validation and control of capping machine settings.